Green Bay Packers, Inc., has been a publicly owned, nonprofit corporation since Aug. 18, 1923, when original articles of incorporation were filed with Wisconsin’s secretary of state.

One of the more remarkable business stories in American history, the Green Bay Packers organization has been kept viable by its shareholders — its unselfish fans. Even more incredible, the Packers have survived and thrived during the current era, permeated by free agency and the NFL salary cap.

The organization's fifth stock offering, which ended Feb. 29, 2012, was a tremendous success with the organization adding more than 250,000 new shareholders becoming owners. For the first time in a Packers stock offering, international sales in Canada were issued for a short while and accounted for approximately 2,000 shares.

All proceeds from the offering are going toward the expansion of Lambeau Field, a $143 million project that includes approximately 6,700 seats, new HD video boards, a new sound system and two new gates. The new sound system was in place for the 2011 season, the new video boards and one gate were launched in 2012 and the new seats and second gate will debut for the 2013 season.

The date for the 2022 Annual Meeting of Shareholders will be determined at a later date.

If you have not received any communication from the Packers in the last 12 months and have moved during that time, please complete the Address Change Request form listed under Changed Your Address?

Please remember to contact us with any address or email changes. The updated information will be used on future mailings and email releases.

Who is the Transfer Agent?

The Green Bay Packers Shareholder Services is the Transfer Agent. Our partner, Broadridge Corporate Issuer Solutions, Inc. (“Broadridge”), provides recordkeeping services for the shares of our common stock. Together with Broadridge, we manage all stock certificate requests for Shareholders, including changes of address, replacement of damaged, lost, or stolen certificates, and transfer of shares.

How may I receive assistance with managing my stock?

We are happy to answer any questions you may have. To speak with Green Bay Packers Shareholder Services, please call 855-8GO-PACK (855-846-7225) or e-mail shareholderservices@packers.com.

Why did I get the old certificate back?

Where can I buy Green Bay Packers Common Stock?

What is the value of my Green Bay Packers Common Stock?

The Green Bay Packers Common Stock is not a tradable stock and therefore does not have a market value.

Can I sell my stock?

No, Green Bay Packers Common Stock is not a saleable stock.

What types of registrations are allowed?

We allow the following three types of account registrations:

Where can I buy Green Bay Shareholder merchandise?

Please visit the Green Bay Packers Pro Shop online at packersproshop.com and click on Shareholders to sign in and view the exclusive Shareholder collection.

What is the mailing address for Green Bay Packers Shareholder Services?

How do I change the address on my stock account?

The quickest and easiest way to electronically change your address of record is to fill out the Address Change Request form under the Changed Your Address tab. Or, if you prefer, you can call us at 855-8GO-PACK (855-846-7225), or e-mail us at  shareholderservices@packers.com. You can also download an Address Change Form at packersowner.com and mail your change of address to:

What are the guidelines for transferring stock?

Adopted children, for whom adoption statutes create the same rights of heirship as children of the body, are considered “lineal descendants.”

If my name has changed, how do I change the name on the stock certificate?

Changing the registered name on a stock certificate may be accomplished by submitting a Routine Transfer Affidavit and proof of name change documentation.

All transfers, with the exception of those initiated by the death of the Shareholder, require:

How do I change the name on the stock certificate due to death?

Changing the registered name on a stock certificate due to death may be accomplished by submitting a Deceased Shareholder Affidavit.

All transfers initiated by the death of the Shareholder require:

If there is no surviving Shareholder and the transfer request is made by an executor of the estate, an original copy of the assignment as executor should be provided. If an assignment document is not available, please contact Green Bay Packers Shareholder Services at 855-8GO-PACK (855-846-7225) for other options.

Can I get the old certificate back?

Yes, all cancelled certificates will automatically be returned.

How do I replace a damaged, lost, missing, or stolen stock certificate?

Submit a completed, notarized Lost Certificate Affidavit signed by all Shareholders named on the certificate with a replacement fee of $25.00 for each new certificate issued, made payable to Green Bay Packers, Inc.

Where can I get copies of the Affidavits?

You can download copies of the Affidavits online at packersowner.com, request copies by e-mail through shareholderservices@packers.com, or by phone at 855-8GO-PACK (855-846-7225). 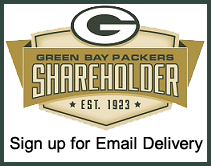